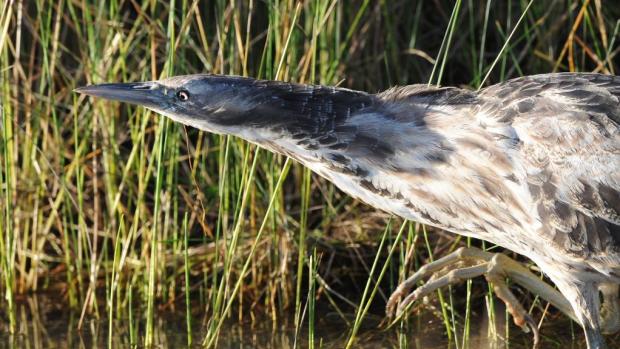 The stories surrounding it are some of the rare few to have crossed over from Traditional Owners to European occupiers.

It’s mating call horrified Australians for thousands of years, and its legend has become the local version of the yeti or the Loch Ness Monster.

Not bad for a relatively small bird that looks, and is, quite innocuous.

The Australasian bittern is also known as the Bunyip Bird, its mating call mistaken for the mythical creature the Wemba Wemba Traditional Owners and European settlers feared lived on the banks of creeks, rivers and wetlands.

Unfortunately, the Australasian bittern numbers aren’t as great as they once were, something the North Central Catchment Management Authority (CMA) is looking to change.

“Under the Federal Government’s National Landcare Program, we have attracted $2 million over the next five years to try to Bring Back the Bittern,” North Central CMA Project Manager Amy Russell said.

“And we want the community’s help to do it.”

There are now only about 2000 Australasian bitterns left in the world, and at the last count about 40 of them were in the North Central CMA area.

“With about two per cent of the world’s population in our catchment, and with a lot escaping the NSW drought, we know how important this region is to them, and we want to make it more so.

“We have managed water for the environment at some of the internationally-recognised Kerang Wetlands, and in 2017 we counted at least 16 at one time at Lake Cullen. Those kinds of numbers are almost unheard of.

“The aim of this project is to find suitable wetlands to create the environment they need to survive and thrive.”

However, the CMA is not just looking at public places to create the right habitat for the birds.

“There are about 1600 wetlands on the Loddon Plains, and more than half of them are on private property,” Ms Russell said.

“Those who have a wetland on their property, no matter how small, are usually aware of it. It could be a small depression, or a place that stays too wet for too long.

“This project could be a great chance to turn a small piece of private land into bittern-friendly habitat, and it’s an opportunity for the local community to be involved in a project that is bringing back one of our most cherished birds.”

This project is supported by the North Central CMA through funding from the Australian Government’s National Landcare Program.