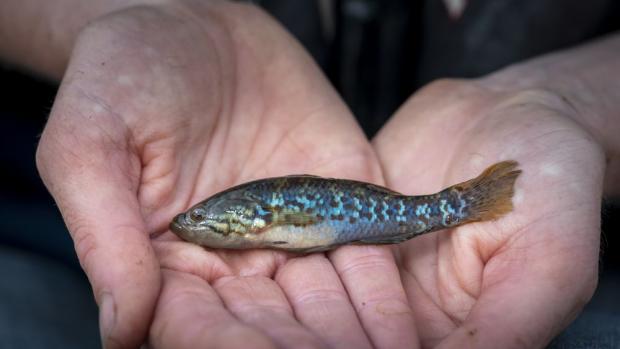 Victoria’s zombie fish is back from the dead, in a big way.

The southern purple spotted gudgeon, a small colourful native fish, was declared extinct in Victoria in 1998.

In late 2019, however, two of them were captured during a survey of Third Reedy Lake near Kerang, as part of a plan to generate water savings for the environment.

“It was a big group because it had a big job to do,” group chair Adrian Martins of DELWP said.

“We were tasked with coming up with a plan that worked towards the long-term survival of the species, while enabling the reinstatement of Third Reedy Lake to a more natural state.

“The drawdown of Third Reedy was put on hold, water for the environment was delivered to keep the water level stable, and the team then worked relentlessly to find out as much as we could about the distribution of fish in Third Reedy and other nearby waterways.”

And it was that work that took everyone by surprise. Another southern purple gudgeon was soon discovered at Third Reedy, three were found at Kangaroo Lake, eight at Racecourse Lake and an astounding 66 at Middle Reedy Lake, next door to the original find.

“We couldn’t believe it when we started finding so many at Middle Reedy,” Mr Martins said.

“Most of our team have worked their whole lives dealing with the decline of threatened or endangered species, so to have an opportunity to be witnessing the opposite is something special.”

Further eDNA sampling will help establish if there are any other purple spotted gudgeon populations further afield in Victoria.

“With so many fish in nearby Middle Reedy, if we find any more during the Third Reedy drawdown, they will have an immediate home,” Mr Martins said.

“We will also use the populations we have discovered in Third Reedy, and maybe Middle Reedy, to start a captive breeding program, funded by the Department of Environment, Water, and Planning’s Icon Species program.

“The aim is to help establish populations in other parts of the state and the Murray Darling Basin.

“This is a really incredible and exciting find. We have a great chance now to not only bring the southern purple spotted gudgeon back from the brink, but to help build its numbers and distribution back up to what they were before European occupation, river regulation, and the introduction of pest species.

“The relevant agencies and government departments will continue the work on the next steps of managing both the fish and the waterways they live in.

“These results mean Third Reedy can now be managed with a more variable water level to achieve a wider range of environmental outcomes without compromising the southern purple spotted gudgeon in the region.”

Once all the water-savings works are completed, Third Reedy Lake will return to a more natural watering regime that will benefit the wetland’s vegetation and bird life and return the wetland to a deep freshwater marsh, which is an underrepresented wetland type within the Kerang Lakes Ramsar complex.