The Irrigation Farm Business Plan, a key tool of the Plan2Farm program, provides the opportunity for you to assess where your business is situated now and where you want it to be in the future.

The rivers meet the wetlands

Its lower reaches are critical vegetation corridors in a landscape with only 13% of original vegetation remaining.

Lifeblood of the region

The Native Fish Recovery Plan has a clear aim; to restore native fish populations and waterway health in the Central Murray system in northern Victoria. 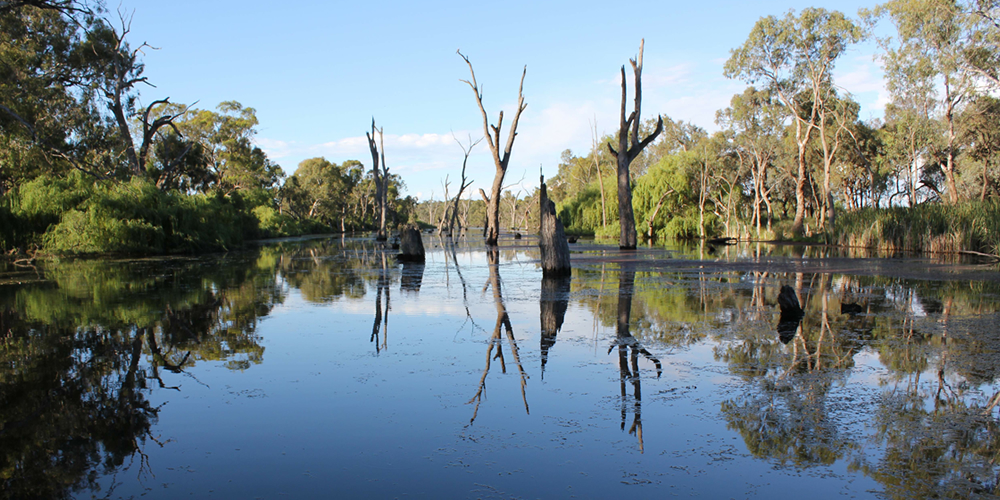 As the southern border to Gunbower Forest, Gunbower Creek is also a priority for healthy waterway flows.

Gunbower Creek is one of the region's most important waterways, with high environmental, cultural and economic values.

The Tullaroop catchment is within the upper Loddon River Basin and is the area inclusive and upstream of Tullaroop Reservoir (including Tullaroop, Birch’s and Creswick creeks)

A sanctuary for platypuses

Round Lake remained permanently inundated and continued to receive a series of top-ups to maintain suitable conditions for Murray hardyhead. The wetland also provide feeding conditions for a variety of waterbirds although compared to recent years the average number of birds observed during the spring and summer period dropped from 1,600 to 750, with the number of observed species richness also decreasing from 15 to 8 species.

Lake Elizabeth received a series of top-ups aimed at establishing suitable conditions for future Murray hardyhead translocation. These deliveries have bolstered the abundance of saline aquatic plant biomass in the wetland, with a 65% increase in coverage since environmental water was first delivered in 2014.

During spring, Richardson's Lagoon was filled from near empty and overtopped to inundate a small section of the adjacent floodplain.

The event created a range of habitat types for waterbird resting, nesting and feeding and supported floodplain plants communities that have not received water since environmental water was delivered in spring 2012. The event saw up to 19 different waterbird species utilising the wetland, with particularly high abundance of grey teal, Australian pelican and Pacific black duck.

Lake Murphy maintained water from the spring 2014 Watering event until January 2016. The wetland continued to support a diverse range of waterbirds throughout spring and early summer 2015 including at least 25 species and more than 1,000 individuals.

Species of particular interest include Australian shoveler, hardhead, intermediate egret, royal spoonbill, sharp-tailed sandpiper and whiskered tern. In addition a brolga pair was observed at the wetland in February 2015 with a juvenile spotted in October 2015.

Johnson Swamp received a partial fill in autumn 2015 to prime conditions for a spring top-up that occurred between late September and mid October 2015.

The top-up was delivered at a steady rate with the aim of promoting an increase in aquatic plant biomass, providing an abundance of food for waterbirds, frogs and turtles. The event was also carefully managed to ensure a brolga nest discovered in September 2015, was not drowned or damaged.

Wirra-Lo Wetland Complex was partially filled in autumn 2015 to prime conditions for a series of top-ups that occurred between October and December 2015 and in April and May 2016.

The Watering event stimulated the growth of a diverse range of aquatic and amphibious plant species as well as an abundance of waterbirds including threatened Ballion's crake, Latham's snipe and royal spoonbill. Migratory sharp-tailed sandpiper and marsh sandpiper were also recorded at the wetland complex.

about Bringing Back the Bittern